Jim Loomis was a native born Floridian raised in Winter Garden, Florida. Jim attended Lakeview High School, where he met his high school sweetheart Betty Beasley and lifelong best friend. They were married for fifty years and had two sons, Bob and Steven, with four grandsons, Jimmy, Mark, Stevie and Trevor.
Jim was always the king of young man that loved adventure and it showed with the life he led. As a young man, his passion was fishing and like all the things he did, it was all in or nothing. Jim was one of the founders of the West Orange Rod Benders, which was group of avid fishermen. Jim not only fished locally, he also fished in many professional tournaments, where he always seemed to finish in the top tier. He was so good that it was a running joke; you didn’t want to be in the boat with him because he wouldn’t leave any fish for the next person in the boat to catch.
Jim also truly loved his family and fell in love with Apopka. He believed that Apopka was a part of his family and proved that with his commitment to promoting and giving countless hours to all those community organizations such a Rotary, where he was a Paul Harris Fellow, Sertoma Service to Mankind, and the Masonic Lodge #36. One of Jim’s proudest moments was watching his two sons follow in his footsteps in becoming Master Masons and Shriners at the Bahia Shrine.
Jim loved adventure; not only fishing but he also had a love for flying. In 2000, Jim Billy Long and Frank Scott entered into a venture opening Orlando North Airpark. They all realized that a local airport would and could be a catalyst for economic growth here in Central Florida and would benefit Apopka. That has always been one of his concerns, making Apopka a great place to live and work. Jim loved to fly, and a little known fact is that most of his life, he never had a pilot’s license. He did finally get his experiential sport pilot’s license in 2011. Jim was a very headstrong person. If he wanted to do something, nothing was going to stop him, even flying, whether he had a license or not.
Growing up in Winter Garden, Ocoee and Apopka was always an exciting time. Jim would recall events going on month long trips herding cattle with his dad, Francis, from South Florida to Savannah, Georgia. In those days, they would use the east coast beaches as a way of herding the cattle back and forth. Jim Loomis’s business values are stated in a slogan that the family uses to this day; “The Loomis Family provides each Family with the caring atmosphere and Respect that Every Family Deserves.”
Jim Loomis was a man that truly loved his family and community, and always reminded us that Life is an Adventure.

Betty, has been a strong supporter of Jim and his success in his life long goals. Betty chose to be a homemaker, until their 2 sons – James R. Loomis, Jr. (Bob) and Steven Paul Loomis, were of school age. Betty, attended Valencia Community College and Nova University. Working in the Education and accounting field has been an asset to helping the family in their Family Owned and Operated Business. Betty, serves her community as a member of the Apopka Woman’s Club.

In 1967, James R. Loomis, Jr., also known as Bob, was born in Orlando, FL.  He attended Spring Lake Elementary School and graduated from West Orange High School in 1986.  After graduation, Bob continued his education at Valencia Community college and later received a Class A Journeyman Electrician License.  After working in this field for a couple of years, Bob decided to return to the business of funeral service, and attended Gupton Jones College of Funeral Service. Bob graduated from Gupton in 1995, where he was a member of the Pi Sigma Eta National Morticians Fraternity. Bob has two sons, James R. Loomis, III, and Mark Bradley Loomis. Bob is involved with numerous community organizations including Rotary Club of Apopka, Apopka Chamber of Commerce, and Apopka Elks Lodge #2422.

Steven Paul Loomis was born in 1971 in Apopka, FL.  He attended Spring Lake Elementary School and graduated from West Orange High School in 1989.  Steven married Paulette Smith from Apopka, FL in 1994. They have two sons, Steven Paul Loomis, Jr., and Trevor Owen Loomis. Steven attended Gupton Jones College of Funeral Service, graduating with Honors in 1994. He was also a member of Pi Sigma Eta Fraternity. Steven is active in the community with membership in Rotary Club of Apopka, Apopka Chamber of Commerce, and Apopka Elks Lodge #2422.

William Gray became part of the Loomis Family in June 1999 while he was still in High School after graduating from Apopka in 2001 he pursued his career in the funeral Service graduating from Gupton Jones College of funeral service in 2004 and passed his state board in February of 2006. William enjoys helping other people and is a very caring and compassionate person who loves to spend his time away from work in the outdoors he is also a member of the Apopka Elks Lodge #2422 and a member of the loyal Order of the Moose Orlando Lodge # 766

James R. Loomis III, better known as Jimmy, is the fourth generation to serve the Funeral Industry.  He attended John A. Gupton Jones Mortuary College in Nashville, TN.  Jimmy grew up in Apopka, Florida and spent many of days at the Funeral Home surrounded by his Grandfather, Father and Uncle.  Being around such strong and well-rounded men instilled strong values into Jimmy from a young age.  His grandfather, Jim, always reminded Jimmy how honorable it is to work in the Funeral Industry and the responsibility he has to every family he serves, to treat them as though they are part of his own family—with the upmost dignity and respect.  Jimmy looks up to his grandfather as a mentor and utilizes the values he was taught with each family he serves.  First, he treats them with compassion and care.  Secondly, he tries to make every effort to provide any and all services in the most respectful manner.

On his free time, you can catch Jimmy out on the water.  He loves spending his time on the River, at Kings Landing, or dirt bike riding with his family and friends.  Anywhere Jimmy goes you can usually find his k-9 companion, Cosmo, behind him.  Jimmy loves the outdoors and nature, and tries bringing the tranquility and serenity into any of his endeavors.

Shannon Castro began working at Loomis Funeral Home in September 2016 while she was attending American Academy McAllister Institute of Funeral Service. She is a native of New Jersey, but began her Funeral Service aspirations soon after settling in Central Florida. Shannon has a 3 year old daughter that she cherishes, and is committed to serving the Central Florida Community, and has a special connection serving the Hispanic and Spanish Communities. Shannon’s family also has a long history within the Seventh-Day Adventist Church and the Christian Community at large.

Marina Spinnichia became part of the Loomis family in April of 2017. She felt a strong connection to the Funeral Home after the loss of her beloved sister Ashley. Marina knows how important even the smallest detail is since she and her family suffered such a great loss. In her spare time she enjoys spending time with her family, friends and of course her 3 fur babies.

Steven Loomis Jr., 4th generation of the Loomis family, began working for his family shortly after graduating from Apopka High School in 2014. He is currently attending Seminole State College pursuing a business degree. He enjoys serving his community, and helping families in their time of need. On his off-time Steven loves riding dirt bikes, standup jet skis and being outdoors.

Elizabeth Godinez is a native born Floridian raised in Apopka, FL. Elizabeth became part of the Loomis family in April 2019. She felt a strong connection to the Funeral Home after the loss of her beloved father, Felix. Elizabeth cherishes every memory that she lived next to her father. In her spare time she enjoys spending time with her husband, Sergio, family, friends, and of course, her three fur babies, Gigi, Ollie, and Osita.

Trevor Loomis, the 4th generation and youngest of the Loomis family, joined after graduating from Apopka High School in June 2019. He is always looking to help and support families during services. Trevor’s interest are graphic design and computers.

Edith Suarez joined Loomis Funeral Home in August 2019.  She has over 13 years of customer service experience.  She experienced a life changing family accident that made her appreciate life and make every day count.  Her father fell from 20 feet high, was airlifted to the hospital, and while waiting for any news from outside the trauma room she realized how short life is. She enjoys spending time with her daughter and family.  Her favorite hobbies are working out and exploring nature.

Andy Tejada has been with Loomis Family Funeral Home since the fall of 2019. He graduated with his Bachelors of Applied Science in Business and Organizational Leadership from Valencia College in December of 2019. Andy was born and raised in central Florida and has a passion for serving his community. During his downtime he enjoys reading and gardening. 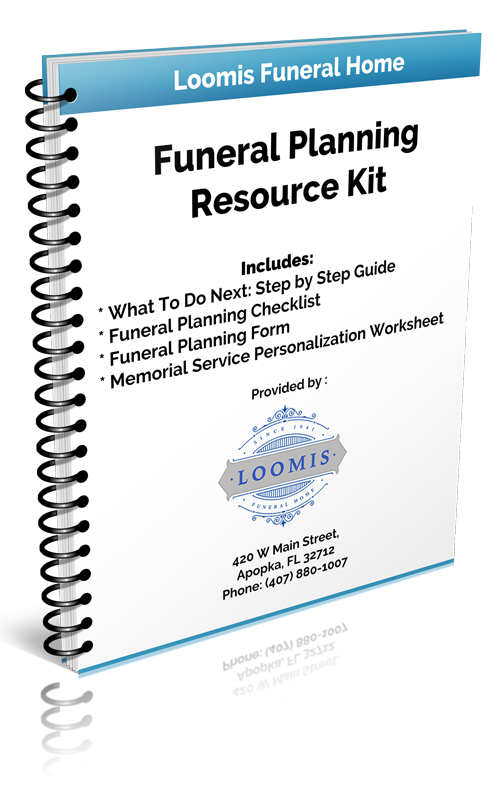