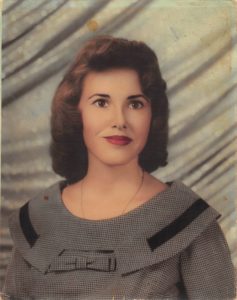 Born in the “Great State of Texas” on May 13th, 1941, Saundria Henderson, had a heart the size of Texas. She was compassionate, pious, and relentless in her love for her family- including her pets.

After high school, Saundria attended a technical school where she learned to use a typewriter and computer. On a weekday afternoon in downtown San Antonio, Saundria was attempting to catch a bus to go home after a day of job hunting when she missed the bus by FIVE seconds. It began to rain, so she ran into a Woolworths. Unbeknownst to her in that moment, she met her life-long love, Charles G. Henderson, who was stationed nearby in the United States Air Force. The pair quickly hit it off and began their lifelong journey.

Charlie and Sandy married on the steps of the San Antonio courthouse. They welcomed their first born, a baby girl they named Beverly Jean in San Antonio. The following year they moved to north Florida to be near Charlie’s family.

While the girl left Texas, Texas never left the girl. Saundria, fondly known as Sandy, mom, and Granma, remained a Texan and frequently told stories of her home state. She would tell stories of the ranch, riding horses, her sisters, and being a cowgirl. She found great comfort in the similarities the deep south provided particularly food.

A short while later the small family moved to Apopka, a small city in central Florida, just a few streets over from Charlie’s brother, Austin, where their children could grow up together. There Sandy gave birth to her second daughter, Annette. In addition to being a doting mother to the young girls, she enjoyed her participation in the Church and the Elks Club.

Sandy furthered her education in Florida, earning credits to become a supervisor. She then quickly found work as a transcriptionist at Winter Park Hospital. She served the hospital for over 25 years. After working at the hospital for most of her career, new technology allowed her to work from home in the early 1990’s. She repurposed a room in their Apopka house into a home-office.

Much to her grandchildren’s delight, Sandy’s home-office could be found decorated with memorabilia from her favorite movies at the time including Batman (Val Kilmer edition), Tomb Raider and Toy Story. She also lined the shelves with small collectible toys. After retirement, she and Charlie looked for ways to better themselves and keep the grandchildren happy by taking them to her favorite store, Goodwill, and putting in a pool.

In addition to loving their grandchildren unconditionally, Sandy and Charlie were very fond of their animals. From the hunting dogs like Roscoe, to snoball and batsy the cats, to taffy and Chachi the Chihuahuas, they took great care of their animals. In chachi’s last days, which were near Sandy’s too, she would buy chachi his own chicken meals from restaurants.

Saundria enjoyed a manicured lawn with fruit bearing plants, which she often did herself until she could no longer; towards the end of her life she’d pull a few weeds, remove sticks and join her son-in-law, Victor, outside as he mowed the lawn.

She loved to dance! From her teenage years to her old age, from the Elks Lodge, to parties, to her living room with her grandchildren, one could find Sandy “boogieing” to her favorite tunes.

In her last few days Sandy was at Hospice House surrounded by her grandchildren, great grandchildren, daughters, and son-in-law Victor, where she passed on peacefully and pain-free to be with the love of her life, Big Charlie. Saundria is survived by her sisters: Debbie, Sharon, and Earline, her five great-grandkids: Paloma, Aurora, Lucia, Karson, and Naomi, six grandkids: Bianca, Nickolas, Aaron, Dalton, Camille, and Jonas, and daughters Beverly Garza and Annette Walker.