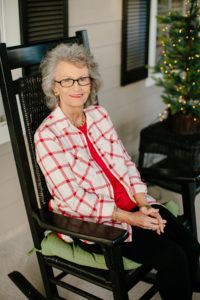 Sandra Kay Carpenter, known by her friends as Sandy and “Grama” by her family, was born in Flint, Michigan on September 8th, 1940. On October 2nd, 2019, surrounded by family, Sandy went home to be with the Lord at the age of 79. She was a devoted mother, raising three girls: Kelley, Karry, and Kathy. In 1974 she settled her family permanently in Florida and started her own business: Sandy’s Wall Covering. During this time she also was involved in setting the foundation for a youth-based ministry that became known as House of Hope. As a co-founder, Sandy was instrumental in cultivating a community of healing for young people. She spent the balance of her working career with House of Hope; she was previously VP of operations and recently served as a member of the Board of Directors. While she was proud of her involvement in ministry, she recognized that her passion was for people.

Sandy was a steadfast mother, grandmother, and great-grandmother. She was known as a pillar of strength to her family; someone who fought the good fight and passionately served others with grace and class. It is impossible to sum up Sandy’s impact on this earth with a single word, but one that comes close is intentional. She was intentional in her relationships with her family; she was intentional with her calling to young people, and she was intentional in her relationship with Jesus above all else.The seed she has sewn with her ministry will continue to flourish through the countless lives that have experienced her grace and compassion.

1 Peter 1:3-5 declares “What a God we have! And how fortunate we are to have him, this Father of our Master Jesus! Because Jesus was raised from the dead, we’ve been given a brand-new life and have everything to live for, including a future in heaven – and the future starts now! God is keeping careful watch over us and the future. The Day is coming when you’ll have it all – life healed and whole.”

A service celebrating Sandy’s life will be held at Thrive Church Apopka 951 N. Park Ave. Apopka, Florida 32712 on Sunday, October 6th, 2019. The visitation will be at 2pm, with a service to follow at 3pm. Flowers can be sent to Thrive Church Apopka at the above address or donations can be made in Sandy’s name to House of Hope at PO Box 560484 Orlando, Florida 32856.