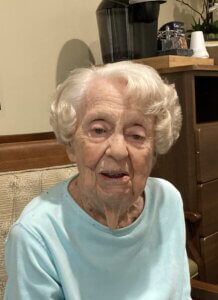 Our beloved mother and grandmother, Elisabeth Lottich Reedy, passed away peacefully on October 31st at the age of 96 years.

Elisabeth, known as Betty to family and friends, was born in Roanoke Virginia on September 27th 1924 to Frederic Jacob Lottich and Mary Jane Simpson Lottich.   She was a young child when her family moved to Mt. Carmel, Illinois and then to rural Central Florida (Umatilla) when she was high school age.    While in high school during the Depression years, she met Irving Reedy, who would later be her husband.   After graduation and a year working in Detroit’s auto industry, Irving went to flight school and then to the European Theater of Operations in World War II as a P-51 fighter pilot, while Betty enrolled in the Florida State College for Women, ( now Florida State University), in Tallahassee Florida.  Irving was shot down in April 1944 and spent thirteen months in a German Prisoner of War camp on the Baltic Sea.   Betty graduated from college and became a social worker in the Tallahassee area while she waited for Irving to return home.

When the war ended Irving returned home and to Tallahassee where he and Betty were married on July 3, 1945.   They moved to Auburn Alabama where Irving enrolled at Auburn University in Electrical Engineering while Betty continued her career as a social worker in the Auburn area.   Upon graduation from Auburn, Irving secured a job with the Tennessee Valley Authority, so the couple moved to Cleveland Tennessee near Chattanooga.  It was there the couple’s first child, Jim, was born in February 1949, and followed a year and a half later by the birth of a second child, Bob.  Soon after Bob was born Betty and Irving became tired of the bleak winter conditions in Tennessee so they moved the family to Orlando, Florida in 1951, where Irving secured a job with the Orlando Utilities Commission and Betty tended to their two young children at home.  In a few years they moved to a home on Bear Lake in the outskirts of Orlando near Apopka, where a third child, Tom was born in November, 1954.   They moved the original house, and built a new home on the site, where Betty and Irving raised their family and lived for the rest of their lives.

When her children were school age, Betty pursued more intellectual challenge and stimulation by attending night and evening classes at Stetson University in Deland where she earned a Master’s Degree in Special Education.  With that she began her second career as a Special Education teacher at a school for physically handicapped children in Orlando.  Her career spanned 33 years until she retired in 1989.

Betty was active in her Church (Church of the Holy Spirit, Episcopal) and was loved by all there and by all of her many friends.  She thrived on intellectual discussions and art and travel and literary pursuits.  She especially loved her extensive European travel with friends and family, and she loved the opportunity to immerse in foreign cultures.  She was kind beyond words to all she met.

Granddaughter Marie pays tribute:  “I would like to honor my amazing grandmother who passed away at the age of 96.  She was a teacher by trade, a world traveler and textile artist by choice and most importantly a singularly gifted mother to her three sons and to her three granddaughters.  She oversaw my cultural education as a child and is the reason I love theater, travel, and art museums.

After she retired she traveled Europe with her wheelchair-bound best friend and came back with many stories about navigating strange places and the wonderful people she met.  She was always up for an adventure and could get anything done that needed doing in that way that those who grew up in the Depression are apt to do.  I have love and respect for her, but mostly I miss her presence in my life.  I love you, G-Ma.  Rest in Peace Betty Jane.”  – Marie Reedy.

The family will conduct a private remembrance for Betty in the near future.   At some date and time uncertain, when the pandemic has passed so that travel and congregation is safe, the family will hold a public memorial service and funeral in Apopka.

Loomis Funeral Service is in charge of arrangements.   In lieu of flowers Betty would appreciate donations in her name to Church of the Holy Spirit in Apopka.

Correspondence may be sent to: