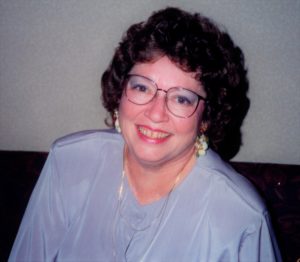 GELALIA, ELEANOR R., 80 of Orlando, died Wednesday May 22, 2019 after a brief battle with lung cancer. She was born in Rahway, New Jersey, July 4, 1938, the daughter of Gordan and Gladys Rice. Ms. Gelalia moved to Lakeland at the age of 3 then to Orlando while in high school. She graduated from Winter Park High School in 1956 and married Frank Gelalia in 1961. Her parents and sister, Barbara (Paul) Smith, predeceased her. She is survived by her daughter Karen Lieurence (Richard) of Ocoee; son, David Gelalia and two grandchildren, Sophia and Grant, of Orlando, nephew, Craig (Janet) Smith, grandnephew Eric, nephew, Joe (Linda) Gelalia, grandnephew Justin and sister-in-law Lucy and several nieces and nephews. Eleanor was an independent bookkeeper for several companies and organizations throughout her career until retirement in 2008. She moved to the Orlando Lutheran Towers shortly after her husband’s passing where she met several new friends and reunited with several older friends. After several falls, the last in 2014, she required skilled nursing and moved into the Commons at Orlando Lutheran Towers. She met several new friends while at the Commons and she participated in daily activities such as bingo, arts and crafts, musical entertainment, but she spent much of her time at the puzzle table putting jigsaw puzzles together. She was a member and served on several boards of the First Congregational Church of Winter Park; a member of the Beta Sigma Phi sorority. Her family always came first and her presence in their lives will be missed. A Celebration of Life will be held on Saturday, June 22, 2019, 10 AM at the Orlando Lutheran Towers, 18th Floor, Orlando, Florida 32801 (407-422-4103). In lieu of flowers, memorial donations may be made to one of the following: Hospice/Vitas, 5151 Adanson Street, Suite 200, Orlando, FL 32804, or any cancer research organization or your favorite charity.