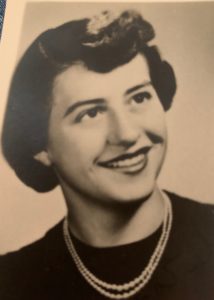 Edna was born November 14, 1935 to Paul and Anna Gleckler in Newark, Ohio, and passed away on November 30, 2019 in Eustis, Florida. She was the youngest of 8 children. After graduating high school in Newark, she married the love of her life, Donald.

She is survived by her children Ronnie Carver, Denise (Mike) Ellis, and Beth Carver; grandchildren Rachael (Nick) Caplanis, Cody (Gretta) Ellis, and Cameron (Jamie) Carver, Waylon Ellis and Briley Lorentzen. After moving to Apopka in 1968 she worked for the Orange County Public School System which she retired from after 29 years, she drove a bus for 20 years. Donald and Edna traveled to nearly every state in one of their many motor homes with their traveling companions, the Orange County School bus drivers that Edna had worked with for many years. She was an active member in the Model “A” Club and enjoyed sewing, cooking, crocheting and spending time with her family.

In Lieu of flowers donations can be made to the Alzheimer’s Association.