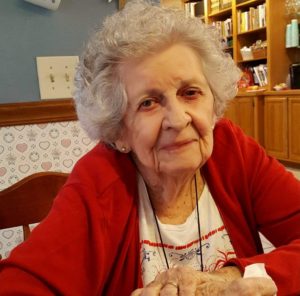 She was born September 28, 1923 in Auburn, New York, the first of two children to George Gordon Vokes and Charlotte Stone Vokes. Her middle name Elizabeth was after her maternal grandmother Lizzy Skinner Stone.

Her father’s job as a traveling auditor for International Harvester meant the family moved every two to three years throughout her childhood, from Auburn to the suburbs of Boston, Philadelphia, Kansas City, and LaGrange outside Chicago.

She met Frederick Lee MacWithey at LaGrange Township High School, and they married June 20, 1944, upon his return from the US Coast Guard. Her one request was that “we pick a place to live and stay put.” Soon after, they purchased orange groves and a home in Plymouth, FL and built Vo-Mac Groves, a small independent fruit packing and shipping house and roadside stand on Route 441 (the Orange Blossom Trail) in Plymouth. In 1967, after a series of hard freezes devastated the citrus business, they moved to Apopka and transitioned to the newspaper business where both spent decades as residential then commercial carriers for The Orlando Sentinel.

Over her 75 years of “staying put” in the Plymouth-Apopka area, Carolyn was an active community member, serving as president of the Woman’s Missionary Union (WMU) and leader of the Girls’ Auxiliary (GAs) at Plymouth Baptist Church, a pink lady volunteer at Apopka Jr-Sr High School, and long-term Secretary in the Apopka Garden Club.

She was an avid gardener, known for her beautiful roses, orchids, and African violets. She was also an adored mother and grandmother, treasured for her warmth, quick wit, always welcoming smile, and up-for-anything (“just let me get my shoes on”) sense of adventure.

She was preceded in death by her husband, her only brother Gordon Thurlow Vokes, and two grandchildren, Travis McCarthy and Michelle MacWithey. She will be mourned and missed by her large and loving family, and many friends.

Calvary Church of the Nazarene