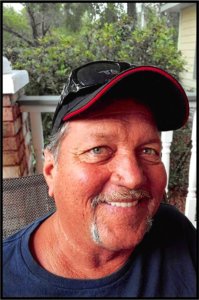 Toby Dean McIntire was born the youngest twin brother on July 1, 1956, in Apopka, Florida. He was the 7th child of John and Edith McIntire. He graduated from Apopka High School in 1974 and moved into the construction industry. Toby worked in the construction business for over 35 years. He brought his love of the industry home with him, working on his own designs from home projects to the first Blue Darter stencils on cars. Many of these designs required tedious hours of hand cutting each detail, which he enjoyed.

Toby was married to Carolyn McIntire for 30 years and they had two children, Lindsey and Chris. Toby was always focused on his family and took pride in the tight-knit family that surrounded him. He was an active participant at every one of Lindsey’s cheerleading events and dance recitals, as well as Chris’s baseball and football games and practices. At family gatherings, he could always be found near the food, usually with a fork in his shirt pocket, or taking photographs. In later years, Toby loved spending time flying his drone, taking drives, and seeing and talking to his two grandchildren, Ian and Nolan. He was a devoted son and was grateful to take care of his mother, including taking her into his home during her final years.

Toby had a gentle soul and was known for his humor and his love for the Apopka community. He was proud to have thousands of friends within this community and had a story for every street, field, or building from a lifetime in Apopka.

Toby is lovingly remembered by his daughter Lindsey (Randy) of Tallahassee; son Chris (Whitney) of Apopka; lifelong friend and companion Carolyn McIntire of Apopka; grandson Ian of Apopka; grandson Nolan of Tallahassee; two brothers, Pat (Susie) of Sorrento and Mickey (Heather) of Zellwood; two sisters, Connie of Ocala and Jan of Moultrie, GA; many nieces and nephews; and many longtime friends. He is predeceased by his father John, mother Edith, sister Jill, and twin brother Terry.

He will be dearly missed by all.