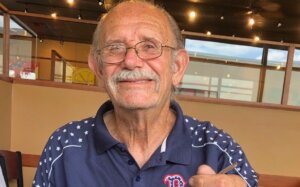 On October 1st 2020 Richard John Pierga 76 passed away after a short but courageous battle with cancer.  “Richie”  was born on May 6, 1944 in Salem, MA and was the only child to Boleslaus & Caroline. He served his country in the US Army and was the Senior Vice Commander of the Polish Legion of American Veterans in Salem. He worked at Stahl Finish in Peabody MA for 40 years to which he retired -only to move on to other part time jobs including the Salem Municipal Golf Course and Auto Zone. Richie was born and raised in Salem and later in life moved to Apopka, FL with his wife and family for his golden years.
Richie was very much a people person. He never knew a stranger and his passion was striking up a conversation with friends, coworkers and people at the coffee shop with a smile  on his face.
Richie had a kind soul and always had a story to share or a light joke to tell. Anyone that knew him was lucky enough to share a story with him. Richie loved his family and his dogs and he will be forever missed.
He was preceded by his wife Patricia Ann and survived by his 7 children. Kathleen, Julie, Jennifer, Kristie, Kimberly, Patrick and Kelly and 12 grandchildren. Rachel, Jamie. Alyssa, Kayla, Joseph, Adriana, Avery, Evan, Aiden, Kyle, Madison and Richard as well as an Uncle; Leo Pierga.

—
A celebration of Life will be held in his honor at a date to be announced.