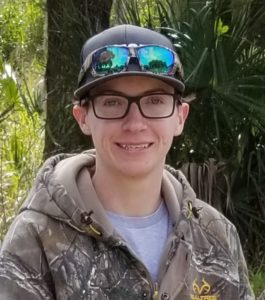 I am a fighter. I have had to overcome quite a lot during my short 18 years of life.  I was born with a single ventricle heart, which means I basically have only half of a heart.  Then in the summer of 2016, I was diagnosed with Burkitt’s Lymphoma. This diagnosis came after years of treatment for autoimmune issues for which I had to receive weekly infusions of immunoglobulins. I have spent much of my life in a hospital for my heart, my autoimmune problems and then for the cancer.

When I was born, the doctors only gave me a fifty percent chance to make it through the first surgery to repair my heart.  I had to undergo three more heart surgeries as I got older to correct the flow of blood, since I only have one pumping chamber.  The technique that was used on me was new, but it gave me the chance to live without needing a heart transplant by the time I am twenty years old.  The procedure worked well for me, however, because I was the only successful patient, the procedure is no longer done on children with single ventricle hearts.

When I was four years old, my immune system turned on me.  It started attacking my own blood cells instead of viruses and infections.  I would have very low red blood cell, white blood cell and platelets all at the same time. It would just happen with no kind of warning.  One day I went to school and by lunch my whole body was yellow. I was admitted to Arnold Palmer Hospital for treatment every couple of months.  The doctors finally put me on a medicine to lower my immune system so it couldn’t make antibodies to anything.  That was the only way to keep my cell counts up.  That caused a problem, because now my immune system couldn’t fight off anything.  That led to weekly infusions of immunoglobulins to help.

In the summer of 2016, I was diagnosed with Burkitt’s Lymphoma.  I couldn’t believe it. I already had too many medical issues for any 16 year old boy, and now I had cancer.  How could this happen?  Why me? I have already overcome so much, now I have to fight cancer.  That summer I had to go through sixteen weeks of chemotherapy.  It continued into the beginning of my junior year of high school.  I didn’t have any hair, so the school gave me a pass to wear a hat.

The doctors decided that a bone marrow transplant was the best option to keep the cancer from coming back and to fix my immune system issues.  I needed a match for the transplant, but none of my family were that match. An anonymous match was found through the Be The Match Program. I was admitted to Florida Hospital for Children on November 7, 2016.  I had ten days of high dose chemo to kill off my own immune system before the transplant on November 17, 2016.  That was the scariest part. My immune system was being killed and I was depending on someone I didn’t even know to save my life with their donation.  It was a relief to hear that the cells were in the building that morning.

The next twelve weeks I spent in the transplant unit of the hospital.  It is not a time I like to think about.  There were complications and organ failures.  It did not look good, but like I said, I am a fighter.  I made it through all of the horrible side effects and complications from the transplant. I was able to finish my junior and senior years of high school with a hospital homebound teacher.  I didn’t get to attend school, but I still kept up and graduated on time with my 2018 class.  It has been a fight for my whole life.

November of 2018 Michael got a cold.  He went to the doctor and they found he had Epstein Barr Virus.  This is difficult to fight off with a good immune system, so for Michael it became unmanageable.  It caused lymphoma to return and invade his entire lymph system. He began treatments as an outpatient, then was hospitalized on February 1, 2019. He spent the next 11 weeks fighting. He never gave up, but nothing was working to rid the virus.

On April 20, 2019 Kevin and I told Michael it was okay to rest and stop the fight. He had been through so much and was so tired. I had been given a book with daily devotions by a chaplain. I read these to Michael every day. On that day the devotion was perfect. “Do Not Be Afraid, for I am with you. Hear Me saying, “Peace, be still,” to your restless heart. No matter what happens, I will never leave you or forsake you. Let this assurance soak into your mind and heart until you overflow with Joy.  Though the earth give way and mountains fall into the heart of the sea, you need not fear!”

We had Michael for 19 years. There was a time that could have only been 4 days.  In those 19 years, Michael had a full life. We did everything we could for him from the day he was born. He loved fishing, his dirt bikes, his 4×4 truck, his guns, hanging with his buddies, wake boarding, his boat, and all the camping trips we would take every year.  He loved us so much, and we love him still.