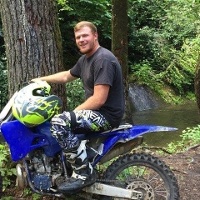 Mr. Justin Levi Eure, age 28, of Blue Ridge, GA, passed away on May 26, 2019. He was born in Eustis, FL on December 20, 1990. He had worked as a heavy equipment operator for several years. He loved to ride dirt bikes and atv’s to their fullest potential. Justin is preceded in death by his grandparents, Mack and Sarah Eure; and his step-father, Stanley Henson.

Justin loved working at Kings Landing, his first job after graduating High School, as well as many other jobs in his life. Kings Landing was his favorite. He has turned wrenches, climbed trees, which where he got his nick name “Tree Top”, which he got from a friend and just always stuck.

I had put him and his sister on mini bikes at a young age and it stuck, he loved being in his grandpas shop growing up, and that never changed. In the last 5 years it was about Braaap Braap or Jeeping. After growing more into the gentle giant he was, with one the largest hearts I had ever seen, he had met a fine young woman in the past year Katie Burke, whom helped Justin grow more and they even road together. Justin operated heavy equipment for the last 5 or 6 years and played in the dirt until his last day.  He liked everyone and it didn’t matter where you came from, he didn’t care, Justin would be your friend.