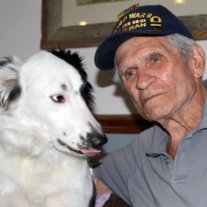 Joseph Charles Archemidi Sanford passed away on May 22nd, 2013. Joseph is survived by his wife of 42 years, Mary Ann, his 2 daughters Michele and Mary, their children and grandchildren, and his beloved dog, Bling. Joseph served with distinction in the 15th Air Force in the European Theater during WWII. He was a bombardier who was shot down on his 31st mission and interred as a POW. Before bailing out of his B24, he saved the lives of his pilot, co-pilot and engineer. Joseph earned numerous commendations including two Presidential Citations, the Purple Heart, Air Medal, Distinguished Flying Cross, Army Commendation Medal, Good Conduct Medal, Air Force Longevity Service Award Ribbon, Honorable Service Lapel Button WWII, American Defense Service Medal, American Campaign Medal, Asiatic-Pacific Campaign Medal, European-African-Middle Eastern Campaign, World War II Victory Medal, Army of Occupation Medal, and the National Defense Service Medal. He attended Penn University and enjoyed a career as an Electrical Engineer at Martin Marietta. Joe was an avid outdoorsman who enjoyed biking, swimming and exploring the Florida waterways in canoe and kayak. He will be deeply missed by his family. His family asks that in lieu of flowers a donation be made to the Wounded Warrior Project in Joseph's name.