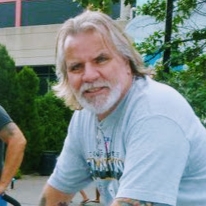 On May 6, 2019, Jeffrey Ujcic, 62, passed away peacefully at AdventHealth Apopka Hospital.

Jeff is survived by his two daughters, Jennifer with husband Monte Cline of Parker, KS and Julie with husband Chris Kleinguenther of Lansdale, PA; his brother and best friend Pug (Rudolph) Ujcic of Orlando, FL; and 7 beloved grandchildren Jaden, Kelley, Trevor, Rylan, & Mallory Cline and Courtney & Scott Kleinguenther. He is preceded in death by his mother Ruth Jean Perko, stepfather William Perko, as well as his father, Rudolph Ujcic.

Jeff was a free spirit with an unrivaled sense of humor. He made friends everywhere he went with his quick wit, charming personality, and infectious smile. He had a passion for Harley Davidson motorcycles and Steelers football. In lieu of flowers or donations, the family asks that you honor Jeff by taking a moment to make someone laugh each day and always driving safely near motorcycles. He will be so deeply missed by his family, friends, and all who knew him