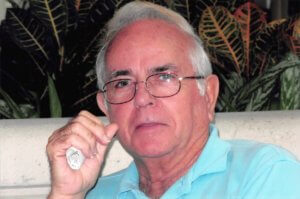 James “Don” Tweed, 88, passed to his eternal home with the Lord on May 07, 2020. Don was born on June 24, 1931 in Harlan County, Kentucky. Raised on a small farm, as one of 12 children, he was instilled with strong family values and hard work ethic from an early age.  In 1950, at the age of 19, he left home to join the United Stated Navy, wanting to serve his country during the Korean War. Upon leaving the Navy, in 1954, he became a civil servant at Wright Patterson Air Force Base in Dayton, Ohio.  After marrying his sweetheart, June Sizemore, in 1956 they began their family. He retired in 1987 and moved to Florida after too many bitter cold winters, but he continued working. Don touched the lives of many people throughout his life.  He loved the Lord and was a Sunday school teacher, a church bus driver, deacon, Minister to the homeless, church greeter and so much more to many people.  Most importantly, he was a fantastic friend, a caring mentor, and a wonderful husband, father, and grandfather.  He always put others first in everything he did.  Don was preceded in death by his parents George Sr. and Alice (nee. Seals); brothers Manley, Howard, Stanley and Buster; sisters Gladys Ethel, Lola and Imagene.  He is survived by his loving wife June; daughters Rhonda and Tammy; and grandson Brian.  He is also survived by his sister Madge Grayson; brothers George and Robert Tweed;  as well as many nieces, nephews, and friends. You will forever be in our hearts.  We love you and miss you so much.  Thank you for everything.

To view service in live stream click on link below: