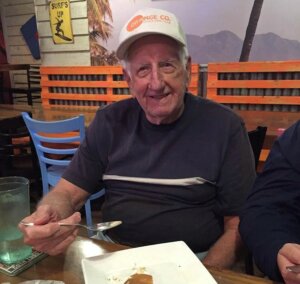 He was a lifetime member of the NRA, Amateur Trapshooting Association (ATA), Pheasants Forever, American Legion, Fraternal Order of the Moose and a World War 2 Navy Veteran. He began his life in Scioto County Ohio where he attended Portsmouth High School before entering the Navy during WW2. Upon his return he attended Wilmington College in Wilmington, Ohio. He retired from the state of Ohio after 25 years of service. He was an avid trap shooter, hunter and loved bowling, tennis and softball. He was a diehard Yankees Fan. In 1969 he moved to St. Paris, Ohio where he was a farmer. Later in 1983 he moved to Florida, where he later retired from the State of Florida Department of Revenue. In 1992 he moved to Rushville, Nebraska where he lived out the rest of his life a “Snow Bird” traveling between Nebraska and Florida enjoying the best of both worlds.

He loved and was loved by his daughters and grandchildren very much. He will be greatly missed.