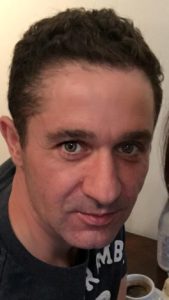 Davide Genio was born January 13th, 1972 in Montreal, Canada. He passed away peacefully and surrounded by family on March 15th, 2020 in Orlando, Florida at 48 years of age. Davide was a cherished Son, loving Husband, proud Father, loyal Brother, loved Uncle to many nieces and nephews and a wonderful friend to many. He leaves behind his parents (Pina and Giovanni), his wife (Olga), his children (Nicholas, Olivia, Michael), his siblings (Marco and Nadia) his many nieces and nephews (Cassandra, Thomas, Sabrina, Adriana, Jackson, Lilliana and Ava), and many other relatives and friends. He is preceded in death by his Grandparents (Pio, Italia, Elio, Chiara), Uncles (Frank and Luigi) and other relatives. David was the first of three children and the first of several grandchildren. He was a true ray of sunshine for many when he was born. In his early life, Davide was a fun loving free spirit, who loved life and to let his sense of fun and humor shine. He was always up for an adventure and a good time! David later became a mastered Chef. He had a genuine passion for being in the kitchen and took pride in his craft. In partnership with his brother, he proudly helped manage several restaurants over his 24 year career. Outside of work, Davide was a laid back, kind person who took pride in his entire family near and far. He had a sincere interest in others and was always more than happy to lend an ear. He was devoted to his wife who he loved and cherished deeply. He was excited for the future and the many new adventures that were set to take place both personally and professionally. Davide will be terribly missed and remembered fondly by his family and friends.