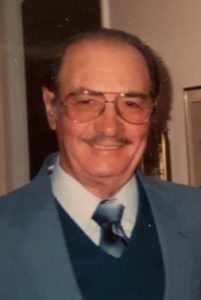 Charles Vito D’Aiuto, 96, of Apopka, Florida passed away on November 16, 2019.  Mr. D’Aiuto was born on February 10, 1923 in Columbus, Ohio to the late Antonio and Josephine D’Aiuto.  Mr. D’Aiuto graduated from Central High School; soon after graduation, from 1942-1946, he served in the US Navy and the US Coast Guard in the European Theater of Operation during WWII.  After WWII he served in the US Navy Reserve.  After his time in the military Mr. D’Aiuto worked in Law Enforcement for the Columbus Police Department until his retirement in 1977; he had served in the police department for well over 30 years and had attained the rank of Sergeant.  Additionally, he was a member of the fraternal order of Police, Capital City, Lodge #9 as well as the American Legion, Post #53, in Sanford, Florida.  He was preceded in death by his sisters Lucille Cashell, Violet Massenilli, Corona Dennison and Margaret Miller. Mr. D’Aiuto is survived by his loving and devoted wife, Josephine; children Toni (Chuck) Stanley and Dr. Charles D’Aiuto and Mary Anne (Michael) Boccard; sister Mary Parker; grandchildren Christopher D’Aiuto, Brenden Boccard, Laci McDonald, Aubrey Bigenho and Jackie Boccard; nieces & nephews Vera Cyre, Dianna Marchsteiner, Shirley Burgess, Thomas Miller, Donald Dennison, and Richard Dennison; sister in-law Carmela (George) Behringer; brother in-law’s Angelo, Frank and Richard Simone.